Few syntactic features highlight JavaScript’s object oriented nature more than the new operator. Many of us have been using it for years but do we really know what it does? In languages like Java it allocates memory for an instance object, invokes a constructor function, and returns a reference to the object. And the same holds for JavaScript. But with the language’s use of first class functions and prototypal inheritance, there’s much more to new.

Before we explore how new works let’s quickly review JavaScript functions. When a function is defined a function instance object is created under the hood, having a prototype property that references it’s prototype object[1]. Here’s an example.

Note I defined a method on the prototype object itself by assigning to function’s prototype property,

For each new Product the following steps occur:

Taking a closer look at step 2, internal properties on the new object are

All prototype objects also have a [[prototype]] property. By default it references Object.prototype, inheriting all of Object‘s properties and methods.

We can visualize these objects in memory. 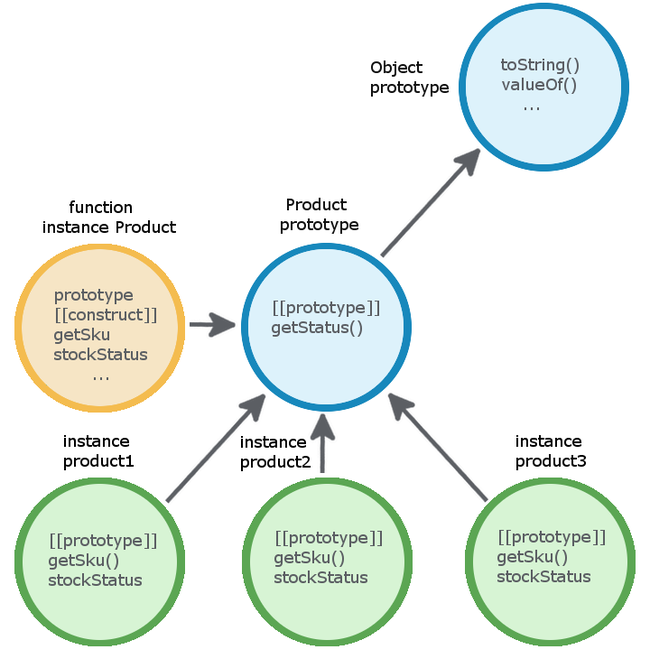 In sum, new invoked Product as a constructor function (Yellow), creating an object (Green), assigning it instance and internal properties including [[prototype]] which point it’s prototype object (Blue), and returning references to product1, product2, and product3. The instance objects now link to the same prototype object thru their internal [[prototype]] property, giving them access to the prototype’s shared methods.

args is an optional comma separated list of values. When there are no arguments, the parenthesis themselves are optional. Constructor functions usually begin with a capital letter.

So why does using new work for some functions but throws TypeError for others?

Functions can be invoked with new when they have an internal [[construct]] property. We’ll look thru the lens of object data types to identify which functions have this property. Objects can be grouped into three categories: custom objects are defined by us developers, built-in objects defined by the JavaScript spec, and host objects provided by the host (browser) environment[4].

All custom functions defined by us developers have the [[construct]] property, being able to be invoked with new. Plain and simple.

Most built-ins objects can be invoked with new, such as these familiar ones.

But what about Math and JSON?

The trick with built-in objects is most have associated constructor functions that can be invoked with new, but those two along with the Global object don’t. There are also built-in functions such as parseInt() and decodeURI() but it’s clear they can’t be invoked with new because they begin with a lowercase letter.

For host objects, only a few have the [[construct]] property.

In this post we covered it by focusing on function objects, their prototypes and instance objects, the actions taken when a function is invoked using new, and what functions can be used as constructors.

I hope there was something of value for you in this post. I’d greatly enjoy your comments or questions. Please feel free to reach out on LinkedIn

Rediscovering MVC and How to Write without a Framework

If you’ve paid much attention to front-end development in the last few years you’ve heard about Angular, Backbone, Ember, and other JavaScript MV* frameworks. They offer structure, bundled APIs and streamlined approaches to complex UIs,... Continue →