The Anatomy of a JavaScript Function

Functions in JavaScript are like classes to Java. They’re the fundamental modular unit: the cell in life, the note in music, the word in language, the funky chicken in dance. JavaScript functions are full fledged objects, often called first-class objects[1], having properties and methods, mutable values, and dynamic memory. Douglas Crockford, one of the early gurus and longtime critic of the language wrote[2]:

The best thing about JavaScript is its implementation of functions.

Functions have the same capabilities as other objects. So it’s no secret they can be:

have properties and methods

defined anywhere an expression can be, allowing them to be nested

The key to understanding functions is in the relationship between three objects:

Let’s focus on the first two. The built-in Function constructor object is itself a function, having a prototype property that references it’s prototype object thru Function.prototype[3]. These two objects are built into the JavaScript runtime before any of our code starts executing.

We can visualize them in memory.

The simple function keyword is a workhorse. When these two functions are defined:

We can also define methods on their prototype objects by referencing the constructor function’s prototype property,

Our Alpha instance and any object instances created by it have access the prototype’s shared methods.

After defining these two functions and augmenting Alpha.prototype, we have: 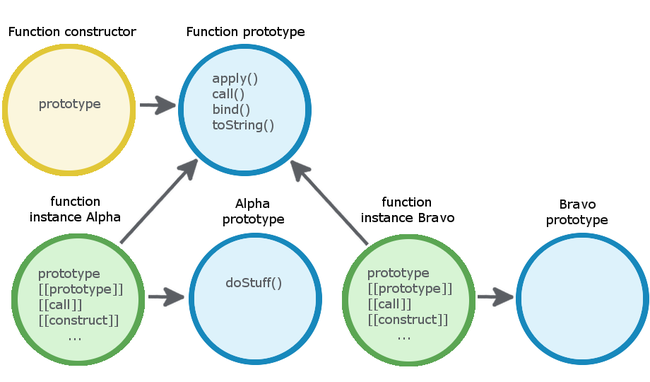 The result is two function instance objects, referenced thru Alpha and Bravo. They link to the single Function.prototype thru their [[prototype]] property, giving them access to the prototype’s useful methods, such as .call() and .apply().

Let’s take this a step further. We invoke function instance object Alpha with the new operator, treating it as a constructor function.

Similar steps as above occur, with some variation,

In short, we used new to invoke Alpha as a constructor function, creating two instance objects referenced as alpha1 and alpha2. The key differences here from when function object Alpha was created is alpha1 and alpha2 are objects but are not functions, so they don’t have prototype objects. 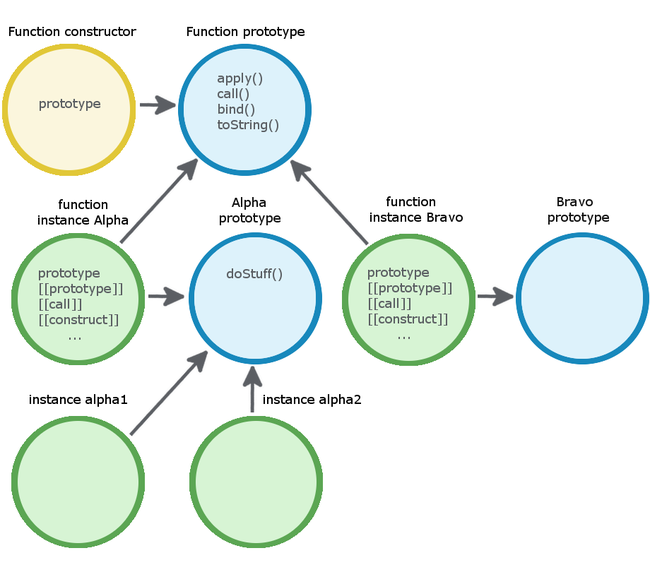 We briefly covered how function instance objects contains several internal properties and methods designed for its execution. It’s worthwhile to have a general understanding of these:

In this post we covered the depths of functions as objects, how function objects are created, what the new operator does, and internal properties and methods used in their execution.

I’d much enjoy your comments and questions. Feel free to reach out on LinkedIn.